Make and teach robots to automate the world!

It sucks  it's gonna be a paid game, i can't really afford pledging and buying anything for 20$ cause in my country it's gonna  cost about five times the price so yeah it sucks. But the pre-pre-pre-alpha is really great Denki hope you  are gonna get the game done soon :) cya. 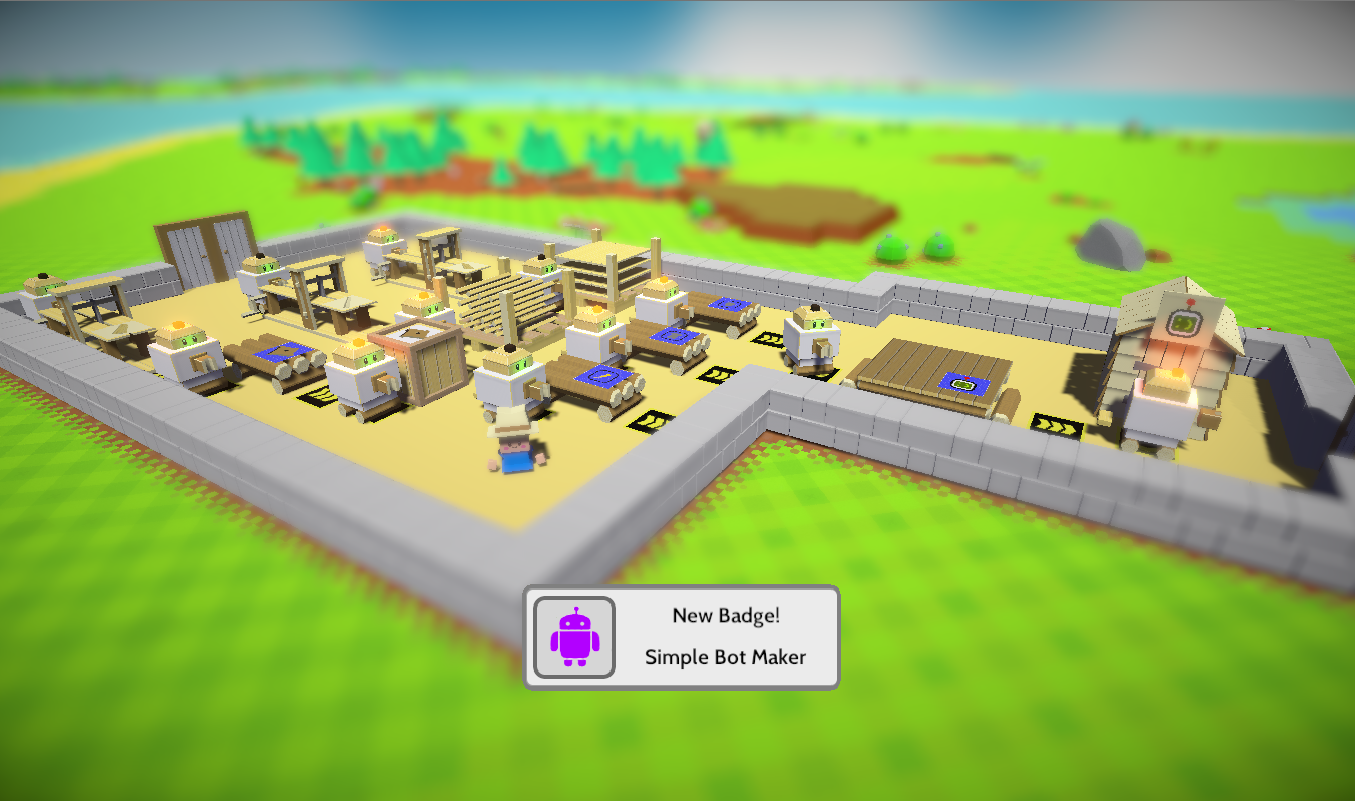 This automated Bot Workshop earned another badge and unlocked a bonus blueprint for a Bot head variant.

Hi Denki,  Thank you for adding another image to this post.

I see at the far left side that there are 3 bots behind 3 machines, either bench saws or crude bench saws.  Would you let us know which?

In front of the worker assembler I see what I believe is a Crude Workerbot (which is larger than all of the other bots which must be Basic Workerbots) and a worker storage for Basic Workerbots.

On each of the machines, I also see symbols that I believe indicate what those machines are making.  The symbol on each of the saws looks line either a plank or a pole.  The only symbol that I can identify on the workbenches is the one on the first workbench which is a crude gear.  The symbol on the worker assembler looks like a Basic Workerbot, which makes me think that this machine's output must have just been changed from Crude Workerbot.

Please correct me if I have incorrectly identified anything here,  Thank you.

On the left are 3 crude bench saws.

Yes, in front of the saw is a basic workbench.

Yes we wanted the worker assembler to have a more basic, functional look. We'll probably introduce and more advanced assembler later on.

All of the bots you see are the same type, that is to say they're all made of Mk1 Drives, Mk1 Frames and Mk1 heads. There's no concept of crude bots any more. The assembler isn't set any more to what bot type you want. It just creates a bot out of what ever parts you put in. So the icon you see on the assembler is kind of redundant.

Thanks for that information Denki.  What you said about the bots being made of drives, frames, and heads makes me want to guess that the symbols on the three basic workbenches behind the worker assembler must therefore indicate that those workbenches are making those Mk1 drives, Mk1 frames, and Mk1 heads.  Is that correct?

Mk2 parts will probably be made on a different machine. I'm not sure what will unlock them yet :)

The hype is real!

This image is fantastic!  It shows a lot of the great, new features that are being added to Autonauts and to the way that the bots can be scripted.

I see in the bot's script a command that says "Find nearest Pine Tree in" followed by a white box.  Can you please tell us what the options are that could appear in that white box?  I hope those options still include something similar to the "?" icon for finding the nearest tree to the training location and something similar to what in the current version is a blue and red icon for finding the nearest tree to a specified beacon.  Thank you,

At the moment the rectangle is a place holder button which, when clicked, allows you to edit the search area for that instruction (each Find Nearest instruction now has one of these). And yes, we'll also allow this to reference a Beacon.